SCEE “TEMPORARILY SUSPENDS” PLANS TO SELL. WE DEMAND 100% PRESERVATION THROUGH AN EASEMENT.

About the Plan to sell

On June 30th, the Schuylkill Center for Environmental Education (SCEE) announced their intention via zoom to sell a 24 acre tract of land to raise money for a capitol campaign.

This land was set aside by the donor family of SCEE’s additional 340 acres to support SCEE in a time of crisis. SCEE has yet to demonstrate a compelling need or reason.

SCEE recently “temporarily suspended” their plan to sell on September 6th. The community demands 100% preservation of the land.

About the Boy Scout Tract

The “Boy Scout Tract” is 24 untouched acres in Upper Roxborough, named for the Boy Scouts who used it to camp. The tract is connected to SCEE’s main 340 acres by Port Royal Ave.

The tract was donated to SCEE under the guidance that it could be sold in a time of crisis to help preserve the remaining 340 acres.

The tract is native forest, and the font of one Green Tree Run, one of the last first-order streams in the city.

The following photos were taken by Doug Wechsler and are available on his site.

Spread the Word! Use these images to post on social media.

Share these images on your social media channels. Use hashtag #SaveTheBoyScoutTract

Why This Land Should Be Preserved

SCEE had the most revenue last year than in any of the 5 previous years!

SCEE has stated that they want to sell to provide for items they’ve described in their capitol campaign, which is not public, which includes items like bird cages.  While bird cages are important, these items do not rise to the level of crisis that the land was set aside for.

No Justification for “Why Now”

In the written justification, under the section “Why is the Center looking to sell the parcel now?“, SCEE simply states, along with their wish list, that they have done this in the past (40 years ago) and they received an “inquiry of interest.”

The fact is the capitol campaign is 10 years old, and the center has regularly received inquiries in the past. SCEE has not presented a justification as to why this has to happen now, in a rushed fashion.

This plan to sell flies in the face of SCEE’s mission as a land steward and to “use our forests and fields as a living laboratory to foster appreciation, deepen understanding, and encourage stewardship of the environment.” SCEE named 2022 their “Year of Restoration“.

Bad for Roxborough and Bad for Philadelphia

The neighborhood and the city will suffer for the lack of this green space.

Neighbors and those concerned are organizing to oppose this sale.

Read or Edit the Petition 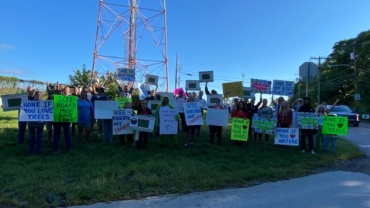 September 9, 2022
Dozens rallied to save the 24 acres of forest today and oppose the sale today. The event was picked up by 6 ABC, however the story was focused on development across all of…

END_OF_DOCUMENT_TOKEN_TO_BE_REPLACED 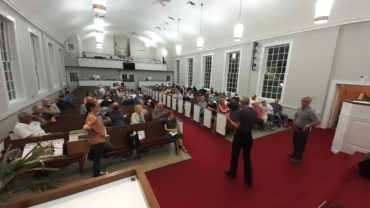 80+ at Community Meeting Pledge to Fight for 24 Acres

September 9, 2022
Over 80 residents attended a special, joint meeting of the Upper Roxborough Civic Association and Residents of Shawmont Valley Civic Association on September 7, 2022 to come together to address SCEE's potential sale…